Home Pregnancy 37 Weeks Pregnant – A Photo And An Update
Pregnancy

37 Weeks Pregnant – A Photo And An Update

This week is an exciting one because I am now full-term and if baby does decide to come early then he wouldn’t be classed as premature. It also means that as long as everything else is okay, I can go ahead with the home birth that I am hoping for.

I have reached the stage where it’s hard to breathe because my lungs are being so squashed, I have to keep taking deep breathes all the time to try and get oxygen in! My stomach is also being squashed and I can’t eat much in one go. If I eat too late at night then I get woken up with terrible heartburn, I can literally feel all the acid coming up into my throat which isn’t very nice at all.

I am not sleeping that well in general, I have to wake up to go for a wee a couple of times and I am also still randomly waking in the early hours and finding it hard to get back to sleep. I get really hot and Mr C and I have been having midnight arguments over having the window open, he tries to sneakily shut it when he thinks I am sleeping but I instantly wake up and go a little bit crazy. There is nothing worse than trying to sleep when you are all stuffy and hot.

I have still been feeling tired, although not too bad and I am trying to make sure I walk for at least 30 mins a day. We went to Bristol last week and took Cherry to the zoo then went for lunch and to get a few things from Ikea. Then in the evening I went out for dinner with some friends, I think I overdid it a bit though because I felt awful on Saturday then on Sunday I had a really bad migraine. It came on with vision disturbances, flashing circles and blinds spots, then resulted in a killer headache which lasted for about seven hours. I was in bed all day which was horrible so I’m hoping it was a one off.

I’ve been getting lots of punches to the bladder and kicks to the sides, when he moves his feet down my side it feels like they catch on something and it makes me yelp. Apart from the uncomfortable kicks I do love the movement though, you forget how amazing it is when they are no longer in your tummy.

We still don’t have a name, Cherry has started calling him ‘Baby Bruv Bruv’ and at this rate that is how he will be known for a while!

All my clothes are getting pretty tight but I don’t want to buy anything with only a few weeks to go so I have been wearing tops that don’t cover my legging covered bum. This is a real pet hate of mine but luckily I can’t see myself from behind so I can pretend it’s all okay! I don’t think my bump has got that big, I was expecting it to be much bigger than with Cherry but I don’t think it is. I have put on two stone so far and gone up a couple of dress sizes but hopefully I will fit back into my pre-pregnancy clothes reasonably quickly. I think cutting sugar out of my diet has definitely helped, with Cherry all I did was eat cake!

I’ve been drinking lots of raspberry leaf tea and my midwife said I can start having massages with clary sage oil, although I might wait until the 19th for that because I am going to Bristol Blog Summit on Friday, having my last hair appointment on Saturday, Mr C has a track day next Friday and his mum is on holiday until the following Tuesday so preferably he will stay put until then at which point I can start trying out techniques to evict him! 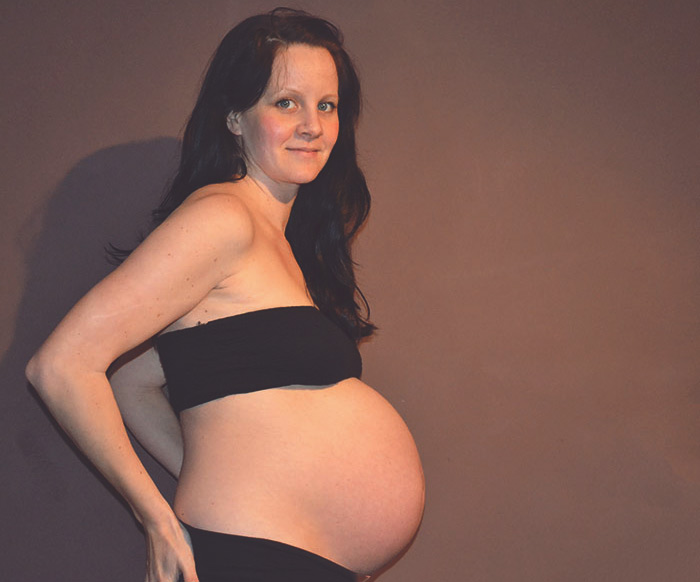 How Do You Deal With Pain?