How To Make A Hanging DIY Canopy In Five Minutes

This DIY canopy is so quick and easy to make!

I’ve wanted to make a DIY canopy since the first time I saw them on Pinterest but they all seemed to involve lots of sewing, which is fine as I have a machine but I don’t have much spare time at the moment and wanted to find a quicker way.

So I had a think and came up with this… 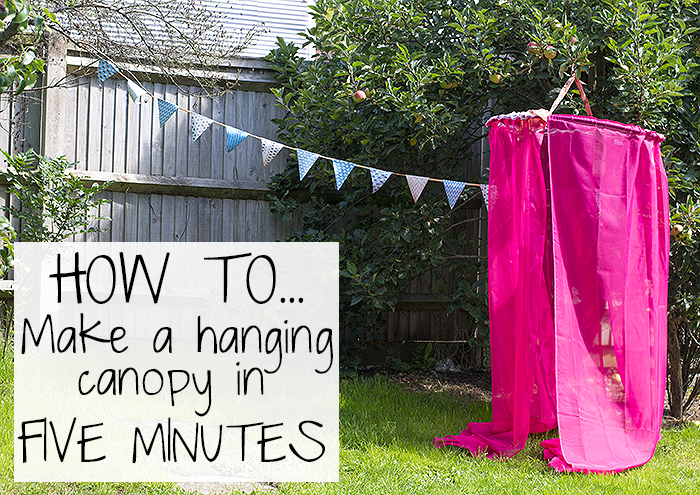 This DIY  canopy doesn’t involve any sewing and it came in at under £15. I had actually intended to sew the material at the top around the hoop but as it turned out I didn’t need to. Also it is actually a lot longer than this but I couldn’t reach the branches to hang it any higher. In the house it hangs from the ceiling with lots of length left still.

The first thing I did was go on a mission to buy a large hula hoop, it’s the wrong time of year to find them in a supermarket so I got mine in Argos. I bought Chad Valley ones and they were on offer so only cost £2.99. I also bought the curtains from Argos, they are really light voile ones and come in lots of different colours, although obviously Cherry wanted this ridiculously bright shade of pink. These only cost around £11.

When I got home and looked at the hula hoops they were covered in a horrible bright, shiny tape which was really easy to take off. Then underneath I discovered that you can pull the hoop apart and put it back together again, I’m sure this is really obvious to most people but I just assumed they would have melted the two ends together or something!

When it was apart I tipped out all the little balls inside that made them rattle too.

Then I fed the curtains onto the hoop and pushed it back together.

To hang the diy canopy up I used one of my scarves and tied a curtain ring in the middle (found these really cheaply in B and Q). I also bought a pack of little screw hooks for hanging it from the ceiling in the house. You can put hooks up in various places as the canopy is so easy to move around. We have one in the living room and two in Cherry’s room. One is above her bed which she loves. Obviously just make sure you have screwed them in securely so it doesn’t fall down. 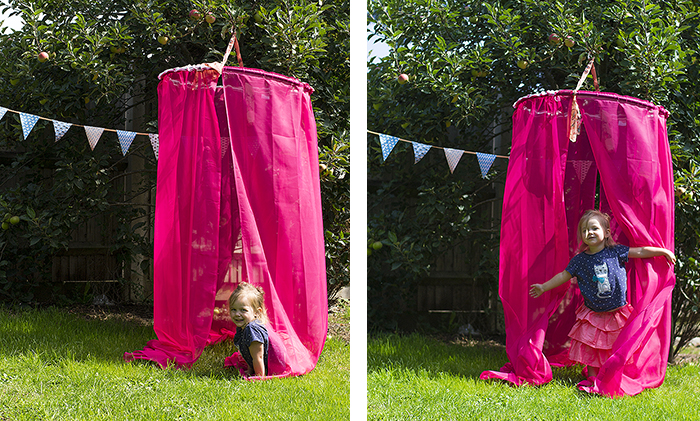 Having A Clear Out To Raise Some Funds

Shopstyle UK Review – What I Thought