8 Week Old Baby – A Photo And An Update

Tiger is now an 8 week old baby, two whole months have passed already and I’m not going to say I can’t believe it because actually I can. It has gone really quickly but at the same time his birth seems like such a long time ago now. 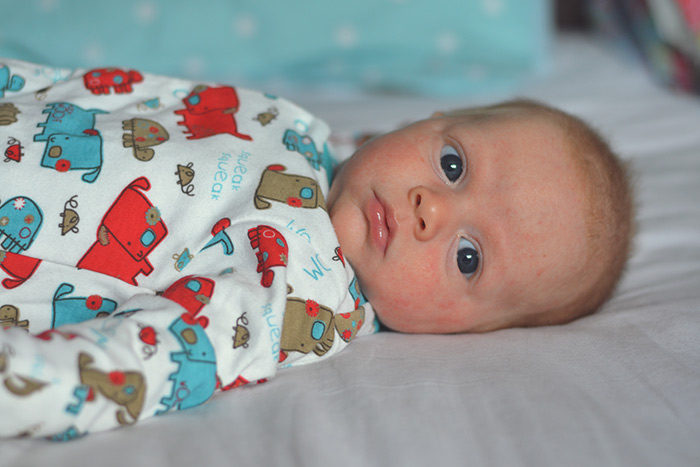 We are still in no routine because like I said a few weeks ago I don’t do routines, mainly because I’m a bit lazy and hate anything that ‘needs’ to be done at a certain time. I am aware of his moans though and what they mean, it’s a lot easier to tell second time round the difference between hunger cries, tired cries or ‘I just want to be picked up’ cries. If I know he’s tired then usually if I rock him for a minute, either in my arms or in his chair and he will fall asleep but he isn’t much of a sleeper in the day and tends to wake again after around seven minutes!

I know some books say this means he is over-stimulated but from my experience it’s just him. He is so different to how Cherry was as an 8 week old baby when it comes to naps. She used to have such deep sleeps in the day that lasted for hours whereas Tiger doesn’t even go into deep sleeps in the day and will easily wake with noise. It would be a problem but luckily so far he is sleeping pretty well at night, whereas Cherry didn’t. He is a lot easier to get to sleep in the day though, it used to take so long to walk / rock / feed Cherry to sleep whereas Tiger will sometimes fall asleep himself or if not is doesn’t take long to help him. Sometimes if he really needs to sleep and I don’t have time to do anything to help him then I will stick him in the sling and he falls straight to sleep in it, usually for a lot longer than 7 minutes too!

By about 6pm he wants to start cluster feeding and that will go on until about 9pm when he is fully asleep at which point I put him in his bouncer and enjoy my one hour of free time before changing his nappy and giving him his last feed before bed. At around 10.30pm we go upstairs and he will wake up for a feed at around 3am and for one at around 5am but will go back down afterwards, although sometimes after the last one he will still only sleep in the crook of my arm.

He sleeps on his tummy which I know they advise against but when he’s on his back he startles and wakes himself up. He’s right next to me and we use one of those sleeping alarm monitors too. 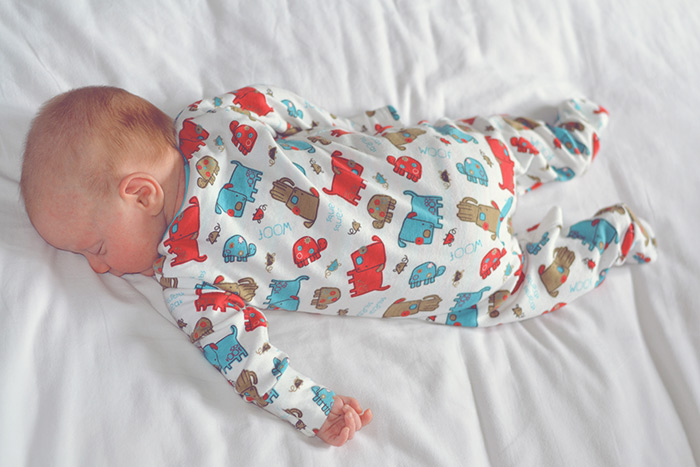 He had his first cold this week which was horrible for him, obviously having an older sister means he will catch things a lot sooner than Cherry did when she was a baby. Luckily he wasn’t too ill though and it was mainly just a blocked up nose. He also had his 8 week check up and first set of jabs this week. He was a bit grizzly afterwards but luckily they didn’t have too much of an effect on him.

He has started giggling and making little noises which is just adorable. I feel bad though because I hardly get anytime to sit and talk to him whereas with Cherry I used to do it for hours. In the evening when Cherry is in bed though we have a little bit of time where he will laugh at the silly noises I make. It is just the best feeling when they start interacting with you after weeks of not doing anything. Luckily he is still a chilled out little thing which with his sister well and truly in the midst of the terrible twos is a relief!