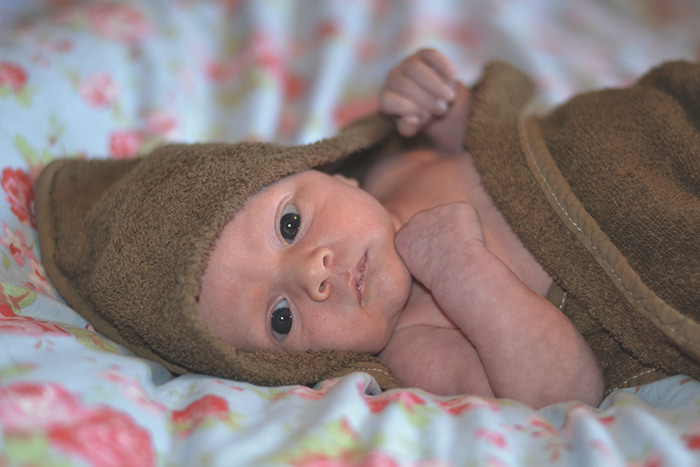 Our new life has become normal and it feels like he has always been a part of our family.

He is still such a chilled out little guy and has been having some fairly long periods where he is awake and alert. I am also sure that he has smiled at me twice, he did it whilst fully awake so I am pretty sure it wasn’t wind, I can’t wait until he starts doing it properly though.

He still doesn’t really cry, apart from when you get him out of the bath but even then it’s a quiet little noise, bless him.

Breastfeeding is still going well. I can’t believe how much bigger he is compared to Cherry who was in newborn babygros for weeks, he grew out of his in days! He seems to have long legs and big feet which is odd as Mr C and I aren’t particularly tall.

I stupidly went to bed with a cropped top thing on the other night as all my bras were crusty from the milk that leaks out through the day. When I lifted it up to feed it must have cut off part of my boob because I have given myself a blocked duct. I feel like crap and my boobs KILL. I forgot how much it hurts but I’m massaging, taking paracetamol and hoping it doesn’t develop into mastitis.

We have taken the side off of the cot and pushed it up against our bed which is amazing and I can’t believe I didn’t do it with Cherry. It means we all have lots of space but night feeds are still really easy. We seem to have good nights and bad nights when it comes to sleep. I usually get a few hours after putting him down when I go to bed at ten but things can sometimes be a bit unsettled after that and I usually wake up with him in my arms! He seems to have a really snuffly nose and it frustrates him. It’s not a cold as there is no snot, I think it might be some kind of dust allergy which will hopefully calm down. I don’t mind though, I am so much more relaxed this time as I know it doesn’t last forever and I love cuddling him so much, especially as he might be our last baby.

I have also found it’s much easier to cope after a bad night second time round, I don’t think you ever get the same quality of sleep back after having kids, you are always prepared to wake up at any little noise!

I’ve started swaddling him as I found it’s made a big difference to how he sleeps at night.

Cherry has her moments but she generally loves cuddling him and stroking him. When she’s tired we do usually have a few problems though and sometimes the way she looks at us when I’m feeding him is a little bit scary. It’s usually followed by a ‘GET HIM OFF YOUR BOOB MUMMY’. Especially if I have to feed him before we go out but I am still making sure I always make an effort to include her in everything. Sometimes I take a photo of Tiger and she will be watching so I will take one of her too, or if I shout down to ask Mr C to see if Tiger is okay then I always ask if she is too.

One big difference to last time is giving birth in the Spring. Cherry was born in the middle of a freezing Winter and we didn’t go out much for months because it was so cold. It has been so nice to go for family walks in the evening and sit with the doors open, and even just to have an extra four hours of light in the evening.