6 Week Old Baby – A Photo And An Update

Tiger is now a 6 week old baby which I guess makes him no longer a newborn, although he definitely still feeds like one!

He seems to look very worried all the time as you can see from the photo below! 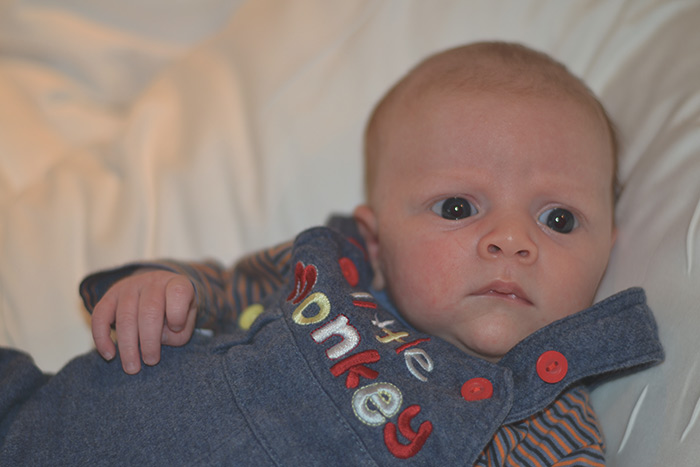 We are in absolutely no routine whatsoever but then that doesn’t surprise me because firstly I’m not a routine person and secondly it’s not really possible to have a routine when you already have a toddler. I guess the big difference is that with Cherry I would be able to help her fall asleep throughout the day whether it be by feeding or rocking / walking whereas that’s just not possible this time. If Cherry needs me to make her lunch or change her nappy and I’m feeding Tiger then I just have to put him down. Or if we walk to the shops and he doesn’t fall asleep then that’s it, with Cherry sometimes it would take three hours!

He is quite different from Cherry  in that respect really as she used to need rocking or walking for hours to go to sleep but it doesn’t actually work with him anyway. If he is tired then sometimes he will just fall asleep and sometimes he won’t, it depends what mood he’s in but rocking has never sent him to sleep so I’m glad I didn’t buy one of those baby swings!

As a result he doesn’t always nap much in the day but luckily because he is pretty chilled out it doesn’t seem to bother him too much. He has started to spend quite a lot of time awake though and can sometimes moan if he gets overtired but he is fine when I pick him up. I know everyone parents in different ways and some people do leave them to cry a bit but I personally can’t as I find it too hard to listen to. If he starts to cry then I have to stop anything I am doing to make it stop as otherwise I feel like my head is going to explode!.

Plus he only usually cries when he wants me to feed him so after I’ve done that he will either be asleep or be happy again, which takes me onto feeding. He is still feeding every hour to two hours really, sometimes three or four for his first sleep of the night but it’s never been longer than that. It’s fine though, it works for me and I love the fact that I can stop him crying by feeding him. Whether it’s for comfort, hunger or any other reason is fine by me as long as he is happy and quiet!

I had been suffering with a recurrent blocked duct in one of my boobs so went to the doctor the other day who surprisingly prescribed me a homeopathic remedy instead of antibiotics and it has worked so well. My boob actually feels completely normal for the first time since he was born.

Night-time sleeping varies, some nights he will go for four hours then wake every three which is a good night and other nights he will wake every one to two hours which isn’t so great. The main difference is whether I can put him back down again though in-between feeds. Usually from about 4am onwards he will only sleep in the crook of my arm but I do love waking up like that and night-times are a million times better than they were with Iyla so I’m not worried at all. They are only babies for a short amount of time so the more cuddles I can get, the better.

We have been bathing him in the big bath on the moulded plastic seat and he loves it for a few minutes then he completely freaks out, looks terrified and screams until he goes bright red. It’s happened for the last few times so now I have to quickly wash him before it happens. Bless him, I have no idea what triggers him to be so scared!

He has got really bad baby acne at the moment, I can remember Cherry having it although not quite so bad. I don’t think there is anything that you can put on it so I’m just hoping it clears up soon. I have no idea what he weighs as our six week check-up appointment at the doctors isn’t until he is nearly nine weeks. I can see that he is getting bigger though as he is growing out of his clothes as a rapid rate, not surprising really given how often he feeds!