Our little man is now 2 weeks old and has settled in nicely.

He is such a chilled out little thing. We have nicknamed him Seagull as the only noises that come out of him are these little squawks, in fact he doesn’t even do that very often and whenever he does make a sound we all turn to look at him in shock! I am making the most of him being so quiet though because Cherry developed colic somewhere around this age and we had to listen to about three hours of screaming every evening!

Breastfeeding is going really well and he is gaining weight. I do have an annoying problem where one of my boobs only produces about a third of what the other one does, this means that he can never just feed from that side and always has to finish on the fuller one. I can remember Cherry stopped feeding from the empty one altogether when she got a bit bigger. I have been letting him stay on it a bit longer, even if he is asleep and only suckling a little bit in the hope it starts to make a bit more milk.

He has been sleeping in our bed, we have a king-size and Tiger goes next to the wall, I go in the middle with a blanket and Mr C goes on the other side of me with a duvet. It just feels so much more natural to have him near to me and it makes night feeds so much easier. 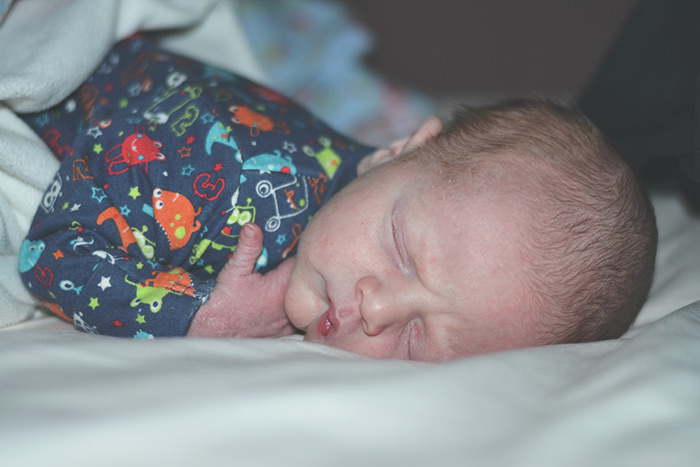 After the 1st few nights of him feeding pretty much all night I started putting him down after feeds and now he will go for about 3-4 hrs after we go to bed at around 10pm, then he usually wakes every 2-3 hrs for the rest of the night but because I don’t have to fully wake up I haven’t been finding the nights too bad at all yet, although again I’m aware it can change at any time!

I am so much more relaxed this time which is nice, I am still pretty obsessive about checking he is breathing but I’m no-where near as anxious and worried as I was when Cherry was a newborn.

I have found that I am enjoying every moment too whereas sadly with Cherry I think I was always waiting for her to sleep better / not cry all evening and before I knew it she was no longer a baby. Everything just feels a lot easier and more ‘normal’ second time round. There is less time to worry about what to do with a baby and more time to cuddle!