Last month we went to Larmer Tree Festival and had such a great time. We were really lucky with the weather which does make a difference when you are at a festival, they just aren’t quite the same in the rain but it’s always a risk in this country even in the middle of summer.

The peacocks and macaws. Most kids love animals, I know mine do, and peacocks or macaws aren’t usually something that you see everyday but Larmer Tree Gardens is home to rather a few of them. The peacocks are usually found by the cafe and they like to go up on the roof of the building too. The macaws can usually be heard before flying overhead.

Great kid’s area with a really reasonably priced cafe to feed them.

Festivals are a slightly different experience when you have children and having a good area for them suddenly becomes a lot more important than having a good all night party tent. The kid’s area here includes a big tent for changing nappies, this is where baby massage sessions were also held. They also had a nursery tent, two performance tents and a craft tent. As well as face painting, an essential for all children at a festival 😉

They had a number of craft activities going on such as turning big boxes into robots for the parade on the Sunday and decorating these totem polls for the lawns. Cherry decided after the effort of making hers she didn’t want to leave it though so she ended up carrying it around instead!

They also had other activities outside like these chalkboards.

Another huge plus point to the kid’s area was the cafe there called The Knitted Pig. They sold food for kids and the prices were so good, they even sold Tiger’s favourite – pasta with pesto. It was £2.50 a bowl which wasn’t bad at all. Feeding a family of four at a festival can be really expensive so this was where we brought the kids to eat. They also sold toasted sandwiches, hot dogs and tomato pasta all made with good quality ingredients. They also had a huge range of yummy cakes catering for all dietary requirements, dairy free / gluten free / sugar free as well as completely raw.  They had proper tables really low down with benches or cushions to sit on as well as a selection of toys so it was perfect for little people.

There are proper buildings. The festival is held in the Larmer Tree Gardens which mean that it doesn’t feel quite as going back to basics as it does when you are festivaling in fields. If you wanted to you could even go and have a cup of tea in the cafe there and possibly use their toilets although I didn’t try this so they might not let you!

The Lost Wood. This was my favourite area, hidden in the trees were all kinds of magical places. They had music in there at night too. 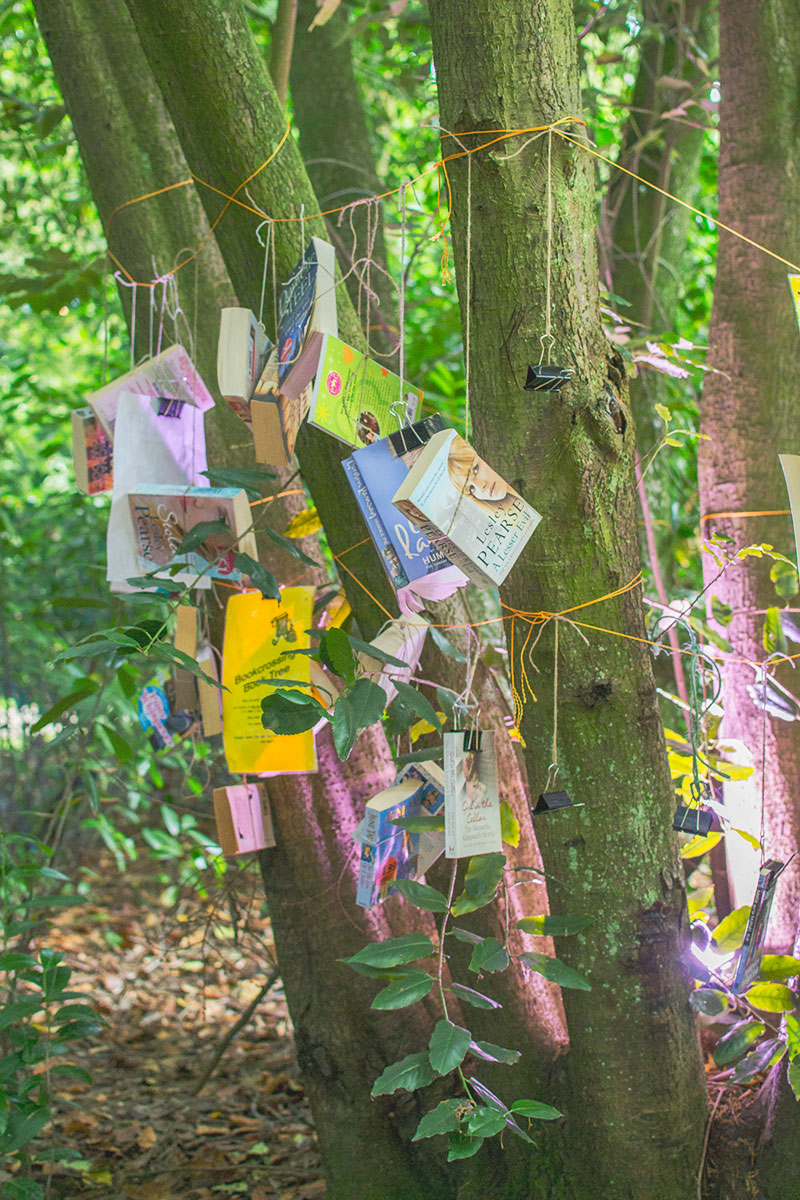 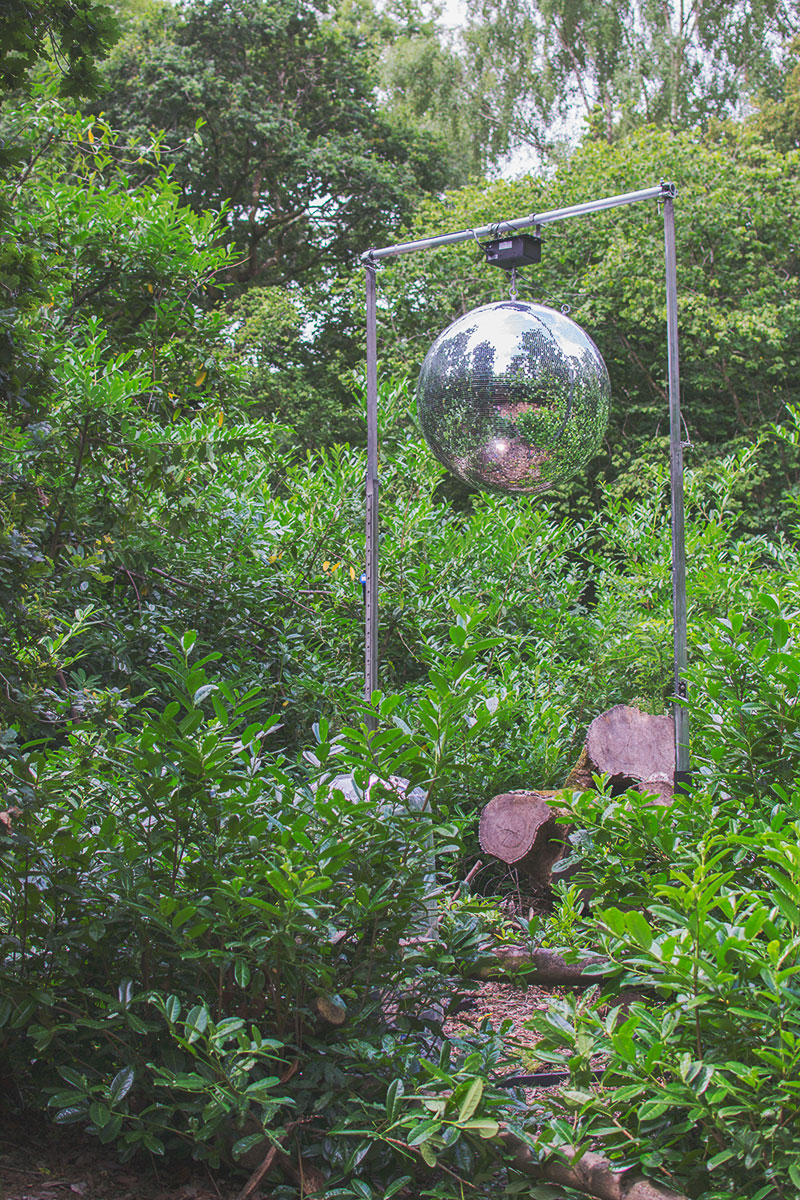 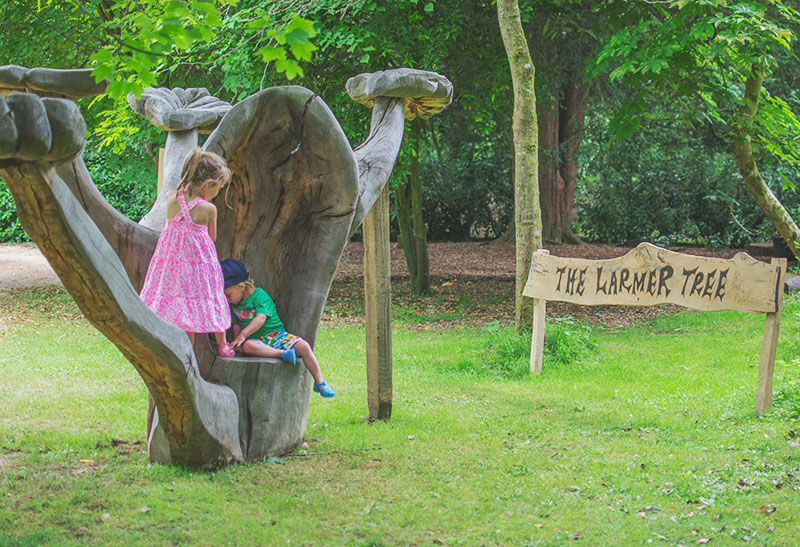 And these random doors which played music! 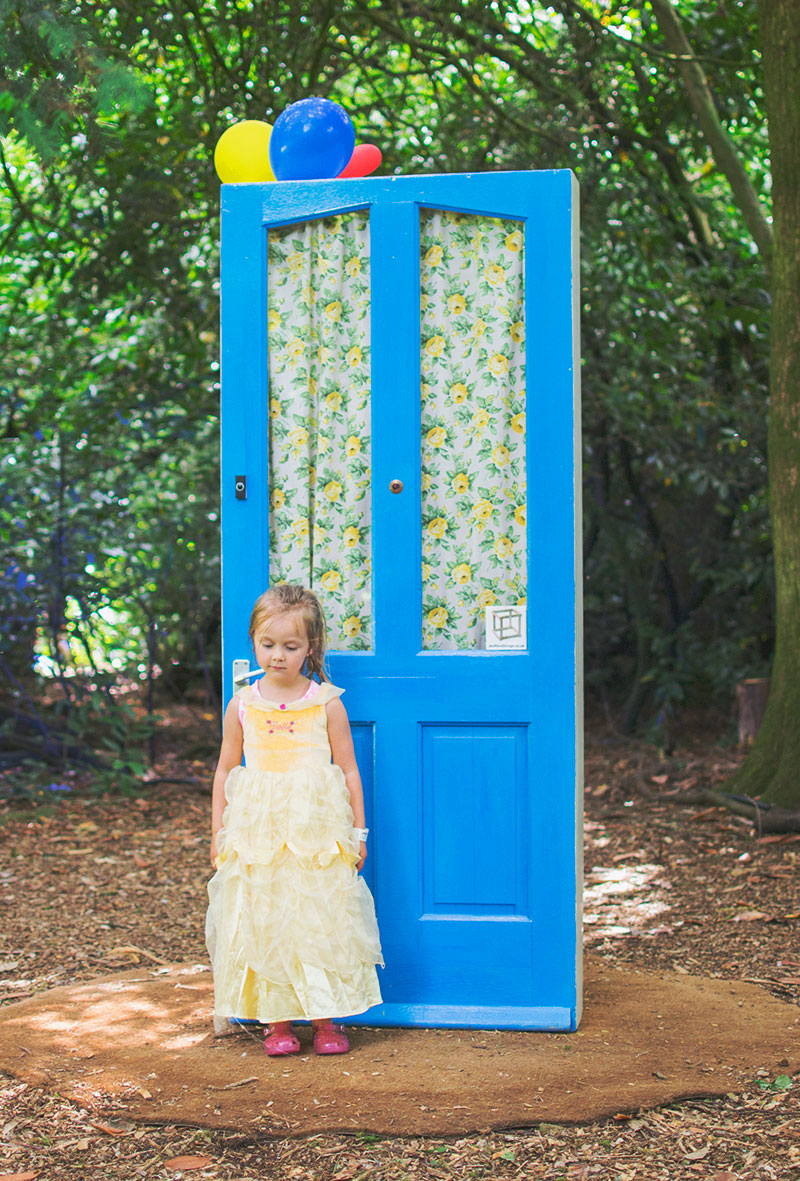 There were also sofas that had been pulled up in the trees in the main area too.

Stalls that sell fancy dress costumes for kids at bargain prices. The whole village was full of vintage / second hand clothes stalls which was heaven for me and I bought a few new skirts to add to my collection. One of the stalls also had rails of kid’s fancy dress costumes where Cherry spotted this Belle costume. She loves an excuse to dress up, although usually that excuse is just a trip to the supermarket!

Craft zones. We are huge craft people in our family, Cherry and I especially so we loved all the craft activities that were going on over the site. They run adult workshops in the village and then as you are heading out of Lost Wood they have a knitting tent and a crochet tent, my idea of heaven! The trees were decorated with knitted bunting and there was also rag weaving outside. I might have squealed with excitement when I spotted it all! 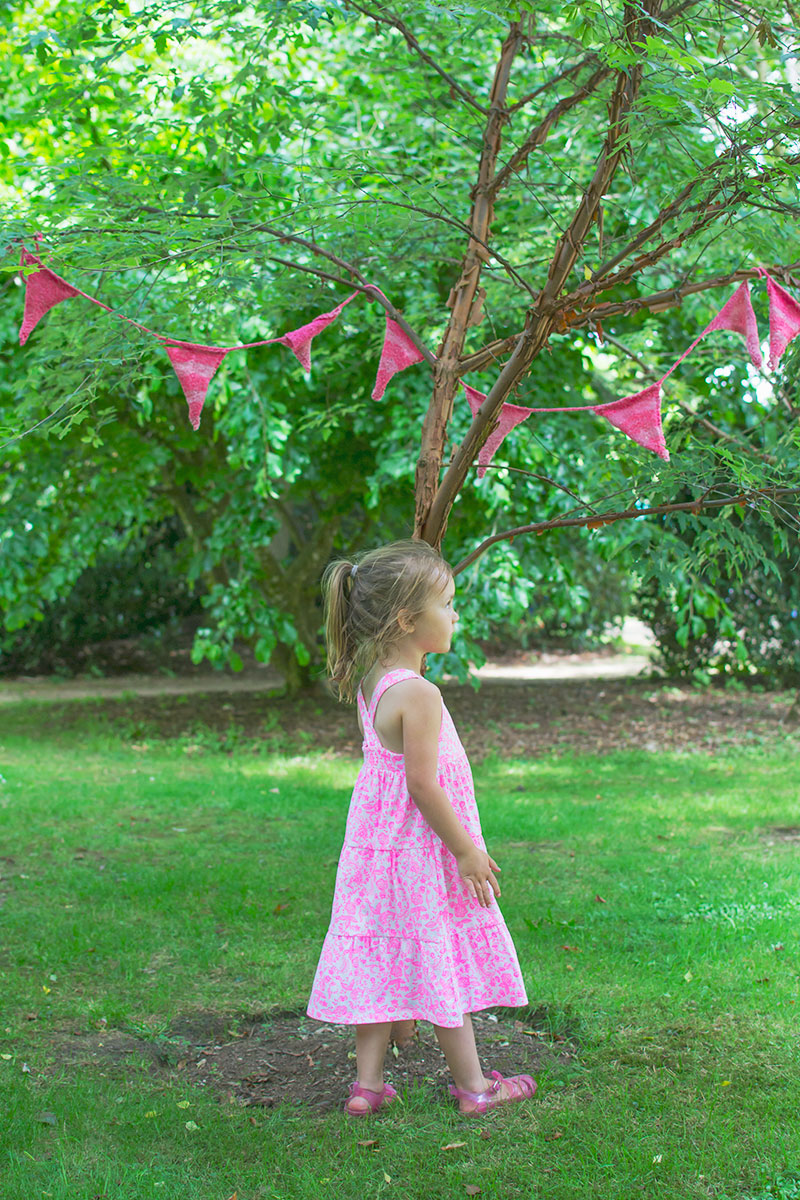 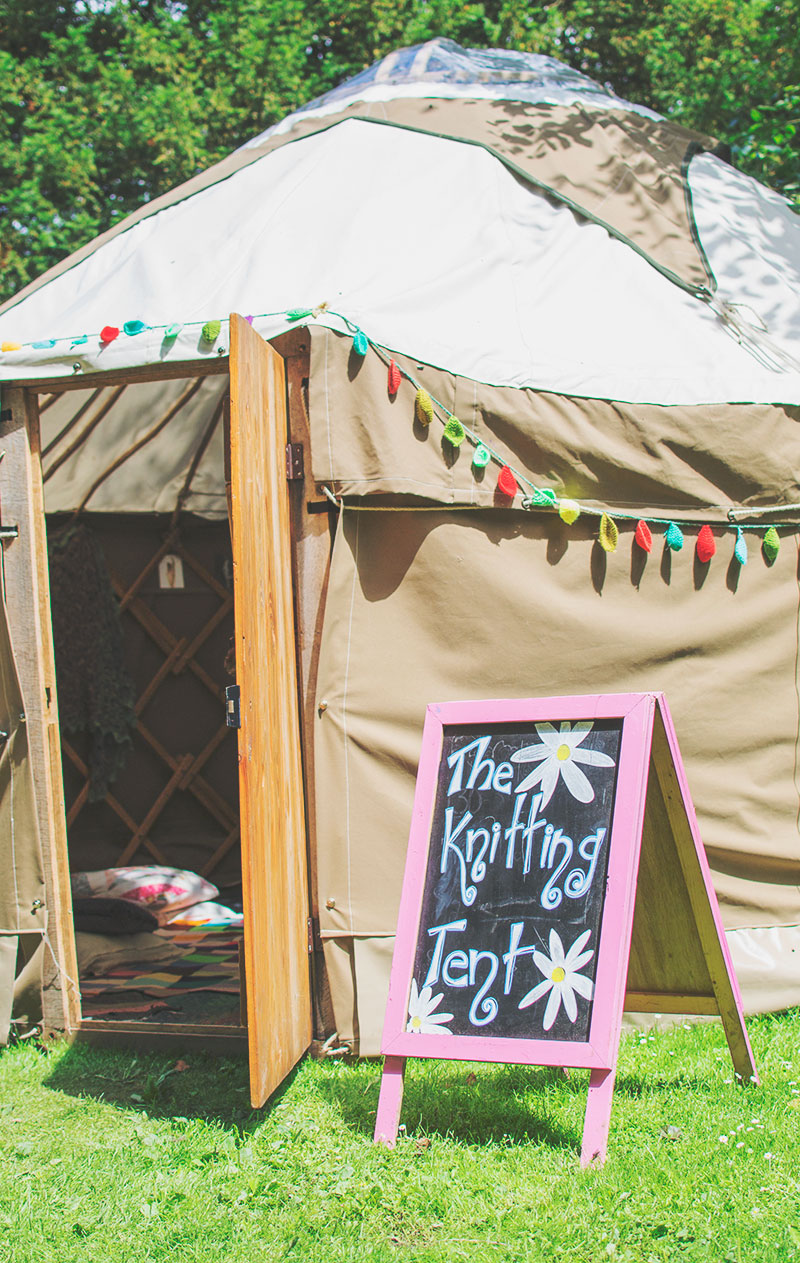 You might have noticed me changing my profile photo to this on all my social media platforms, it was on the floor outside the knitting tent and I just love the colours on it.

Bubble guns. Now I know these are special to Larmer Tree Festival but it’s the first time the kids have seen them so they spend a good few hours being entertained by them before then crying because the bubble mixture had run out but we will forget about that part 😉 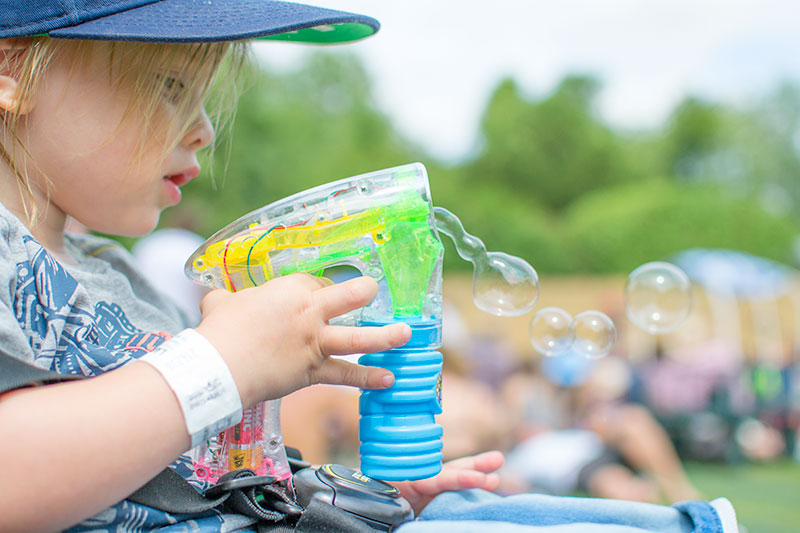 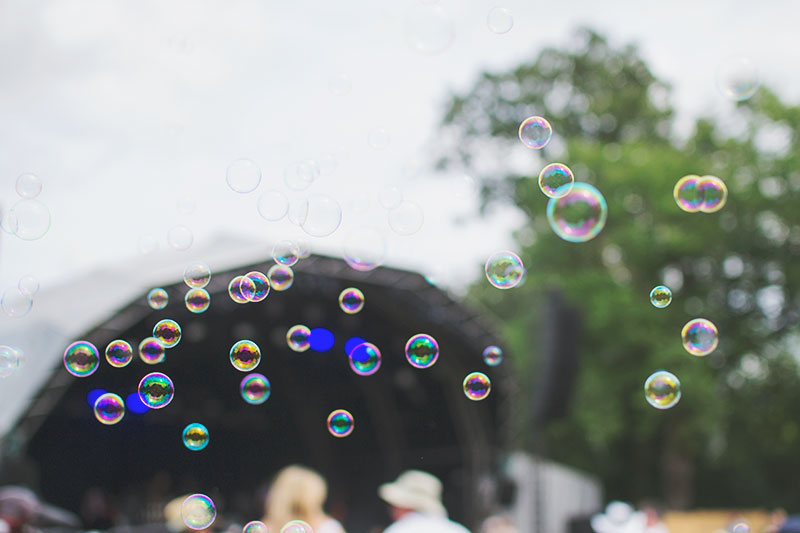 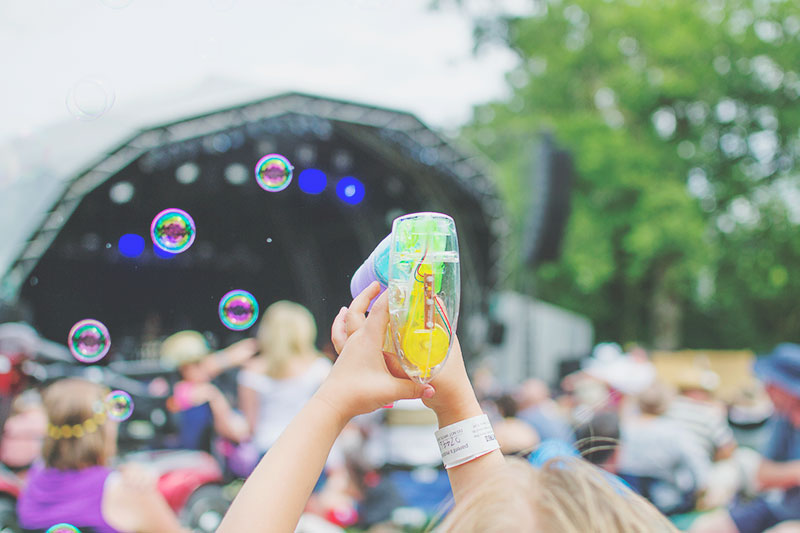 The festival isn’t too big. When you have young kids you don’t want to tire them out by making them trek across a huge festival, this one is a really good size and we walked it all many times without Cherry complaining about being tired. There is just the one main stage then the garden stage is next to it. Then round the corner in the village is where there are a couple of large marquees as well as a smaller one. Either direction of this is Lost Wood and the kid’s area. The village area has a fab range of food stalls including Pieminister (a festival essential) and a great juice bar too. 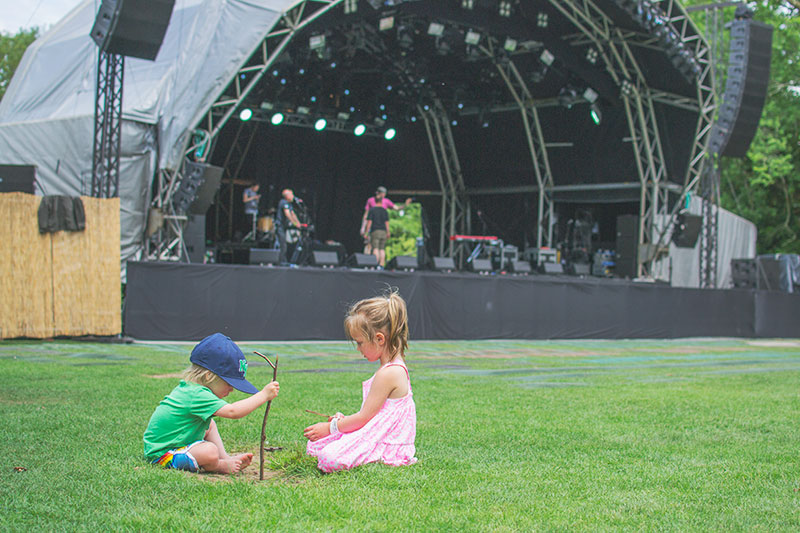 Clean toilets. Toilets are quite important when you are at a festival with young children and I was really impressed with the ones here, they always had toilet paper and didn’t smell too bad either. They also had the cubicle ones and not just portaloos.

The only thing I can’t really comment on is the camping area because we decided that due to only living an hour away there wasn’t much need for us to stay overnight. I did walk past all the camping fields though and they looked great. There are a few different areas and one is for families. They also have boutique camping, my friend Fritha stayed in a bell tent and you can read about her experience here.

We honestly loved our time at Larmer Tree and will definitely go back again. There was a really great vibe and one that was quite different from festivals like Glastonbury where everyone is getting wasted. There were a lot more families and older people here so it felt like a nicer environment, to me anyway. I would like to take them to Glastonbury at some point but there are areas there which I would avoid due to knowing that people had been taking drugs or drinking a lot of alcohol. There wasn’t anywhere that felt like that here.

It was a perfect festival for us as a family with two young children. 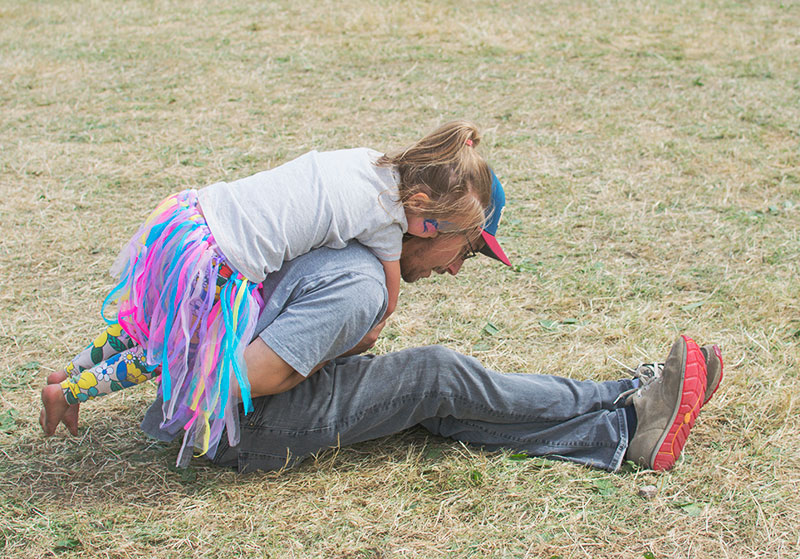 We were sent press passes to attend the festival, all words and opinions are my own.

An Alternative ‘Back To School’ Q And A With Cherry

A Day At Burton Bradstock Beach – Photos And A Video

Camping At A Vintage Car Festival