Home Advertorial What Baby Products Do I Really Need?
Advertorial

What Baby Products Do I Really Need?

When you find out you are pregnant for the first time the thought of what baby products to buy seems really overwhelming, there is SO much on the market these days and some of it is a complete waste of money.

It’s such an exciting time though, I can still remember buying baby clothes when I found out I was pregnant with Cherry. We were on a fairly tight budget so thankfully didn’t end up with much that we didn’t use but I know I made the mistake of buying some cute newborn dresses that were never worn. Trying to dress a newborn in a dress is not only hard but they usually puke / poo on it within ten minutes meaning you have to take it off them anyway!

So I thought I would share with you the baby products that we found to be absolutely essential. Obviously this is just my personal opinion but if you are pregnant for the first time then hopefully it will help in some way.

So first up is muslins, these thin cloths have so many uses and should be to hand at all times. They are great for wiping snotty noses, cleaning up puke or for shoving down your bra when your boobs are leaking! They come in a huge range of colours these days too.

Another item we found essential was the Grobag, these are such a great invention, not sure what people did without them. Both of mine were wrigglers so blankets would end up kicked off. They come in a range of togs too, sheet thickness for summer and extra thick for winter.

Baby monitors have taken such a huge step forward these days too, you can now get them with sleeping mats and alarms (we had one like that) or even video monitors that connect to your phone. I was such an anxious parent so for me products like this gave me the peace of mind I needed.

Baby bouncers / swings. These are one of those things that some babies hate but if you can put your baby in them then it can make your life so much easier. Cherry loved her vibrating chair and would sleep in it happily for hours whereas Tiger didn’t like it at all. If I was to have another then I would get a swing I think as this motion usually sends most babies to sleep.

So onto the question of what pushchair to choose. This is a really hard one because there are SO many different types with very different price tags. There are the travel systems, some of which can be quite heavy or lightweight strollers which can be used from birth. Cherry only liked the car seat attachment of her first pram and wouldn’t ever go in the seat unit of it whereas I never used a car seat attachment with Tiger as it didn’t fit on the buggy we had at the time. Tiger didn’t actually go in a pushchair properly until he was about ten months old as I carried him (more on this in a minute) so had I invested in a travel system it would have been a total waste of money.

Nowadays with all the great prints you can find it’s hard not to choose based on how the pushchair looks! This is the Cosatto Supa in Foxtrot.

We also used a buggy board for Cherry which was AMAZING. 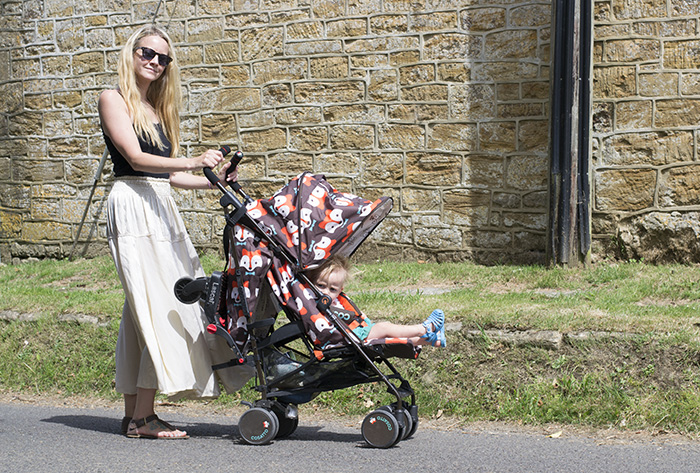 So as I mentioned above we didn’t use a pushchair for Tiger until he was much older which worked quite well as Cherry was still using it. I ‘wore’ him instead. I didn’t know about babywearing when Cherry was a baby but was really excited to try it with Tiger and I loved it. It made life so much easier and was like having a constant cuddle. I keep meaning to write about my babywearing experience and the types of carriers I used but a Moby wrap and Ergo were my most used brands.

When it comes to things we didn’t use so much a Moses basket would be one of them. Neither of the kids ever slept a night in one, no idea why but they hated them. With Tiger we took the side of his cot and pushed it up against our bed. I wanted to co-sleep but liked the idea of him having his own space so it worked really well for us. Instead of a Moses basket I would have gone for one of these rocking cribs as both my babies liked being rocked, most babies like being rocked and in the middle of the night it’s easier to rock a crib then get up and wheel a pushchair around, yes I might have resorted to that in desperation 😉

We didn’t ever use a changing unit either, I know most people do but we didn’t have room so just opted for a changing mat on the floor, it worked perfectly well for us.

What baby products did you find invaluable / not use at all?

Holiday Cottages In Cornwall – Our Stay At Bosinver: Part One