Tiger as a 7 month old baby…

I am always a bit late writing these posts so Tiger is in actual fact nearer to eight months than seven and is all of a sudden looking really big.

He now has two teeth.

As a 7 month old baby he is crawling on carpet, hasn’t quite managed it on our laminate flooring yet as it’s slippy but he is super fast at army shuffling so uses that if he wants to get somewhere quickly. He is also sitting up.

It was tough as there were quite a few weeks where I couldn’t put him down without him screaming, even giving him to Mr C didn’t help. He is still very much a mummy’s boy but he’s been a lot happier for me to put him down a little bit again, as long as he can still see me that is. 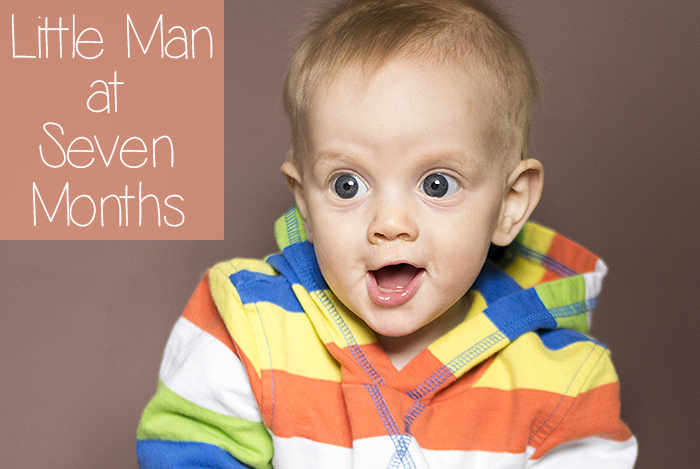 Another big update is that he’s not in our bedroom anymore. He was getting so disturbed with me next to him and would cry until I picked him up every time he woke (which was a lot) so we just went for it and it’s worked out really well.

The first week was a bit stressful, I wrote about it here – Sharing Is Caring – but now we are a couple of weeks in things have settled and the last three nights he has been sleeping for eight hour stretches. He goes to bed at 6.30pm so he ends up in our bed by about 5am where I can get him back to sleep by feeding him, I find it really hard to get up and sit in his room doing it at that time, plus he doesn’t go back to sleep properly in his cot after that feed. I can remember Cherry doing the same actually, and I don’t mind at all because he is doing most of the night in his cot.

He has got a lot better with solids. I’m still mainly giving him blended food but if we are having pasta he usually has it too, he loves it. He also loves avocado.

Breastfeeding a 7 month old baby is going well. He feeds a lot in the day but again the fact he is sleeping better at night means it doesn’t bother me at all. I love being able to sit down and have ten mins peace while he feeds and he still only naps on me or in the carrier so in the afternoon I am more than happy to stick him on the boob and get to sit down and rest for a couple of hours!

And he is desperate to walk! He loves me standing him up on his feet, I’m pretty sure it’s because he wants to copy Cherry. It’s crazy to think that she took her first steps at nine months, it’s only a matter of weeks until he is that age. He doesn’t seem as sold as she was though so I don’t think he will be doing it that soon but we shall see!

He adores his big sister and watching the bond between them develop is amazing. It makes all the hard work worth it.

There Were Four In The Bed….