I’ve been planning to write about my baby wearing experience for so long, Tiger is two this year and I haven’t ‘worn’ him since just before he turned one but better late than never I guess 😉

After having Cherry I didn’t know anything about baby wearing, I tried her in one of those Tomy carriers once but it was so horrendously uncomfortable I didn’t even manage to go out with it on. It was only when I was pregnant with Tiger that I discovered the world of wraps and other carriers that were meant to be better for baby and the backs of the people using them. I’ve always suffered with back problems so the idea of having an ergonomic carrier that carried the weight evenly across my back really appealed plus it made sense to me after looking at the photos that having the baby in a seat position instead of dangling was going to be better for them.

The first carrier I tried was a Moby wrap, this is made from stretchy material and is perfect for use from birth, in fact it’s usually the wrap people begin with. It took me quite a few attempts to get the hang of wearing it properly and there is a LOT of material so it can seem a bit scary at first. Once it’s clicked it’s so easy though and the nice thing about this is that you put it on before putting the baby in so you can go out with it on and if you have to drive anywhere then you can just pop the baby in when you get there. You can also take the baby out without taking it off. It can be loosened up so you can breastfeed in it too although it’s only recommended to do this whilst sitting down (I did manage to breastfeed on the go with the Ergo though, see below).

My one tip for using a Moby is to tie it way tighter than you think. To start with I didn’t do this and as it’s made of stretchy material it would get too loose and I would have to hold Tiger at the same so the tighter the better. My favourite thing about this wrap was that it felt so cosy and comfortable due to the material being soft. The negatives were that because there was so much material it can get really warm and we had a boiling summer the year Tiger was born so I had to find something lighter. Had it been winter it would have been perfect. 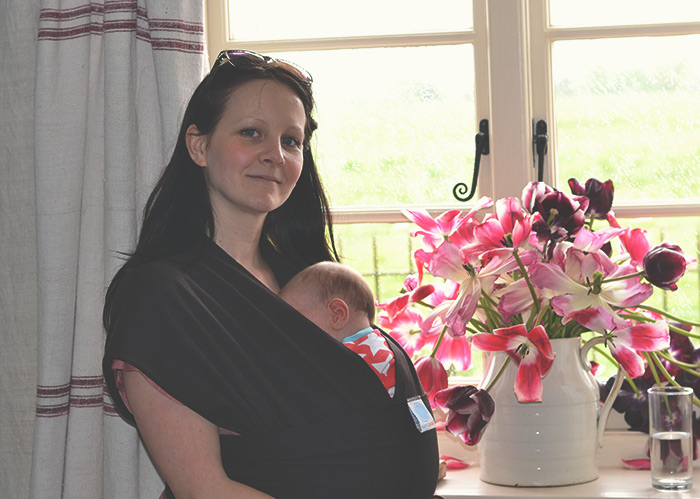 After doing lots of research into the best carriers for hot weather I went for a Calin Bleu gauze wrap, it’s made out of really lightweight material almost like muslin so was perfect on a hot day. This isn’t stretchy so you have to put the baby in before tying it up and can’t just pop them in and out like you can with the Moby but there is a lot less material so it’s much easier to do when you’re out.

I loved using this wrap, sometimes I had to re-tie it to make sure I had it in the best position but once it was right it would stay tight and I used to wear it for hours. Tiger used to have all his naps in it.

The downsides to this wrap is that it can dig in and get quite uncomfortable when the baby gets heavier. I only used it for the hot months of the summer when Tiger was around 3-5 months old. It would be great for taking on holiday though as it takes up hardly any room in a case. 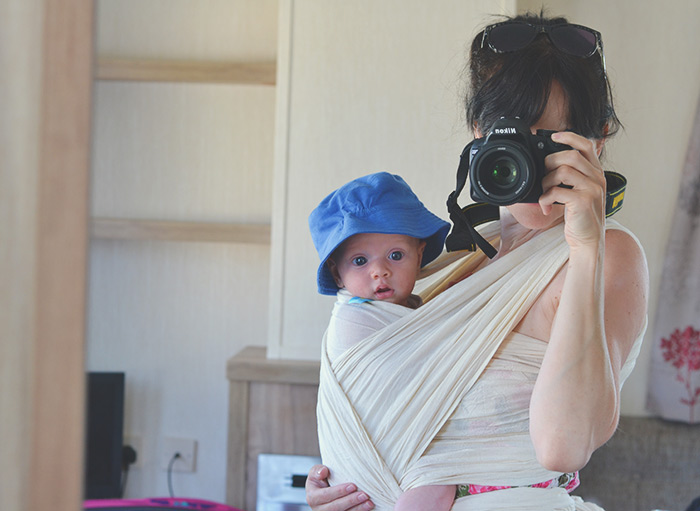 The carrier I went for next was an Ergo Original. This is a buckled style carrier and the one I used for the longest time, I pretty much had it on constantly for months as Tiger had all his naps in it and it was a good place to put him when I was cooking / cleaning. It can be a bit tricky to reach the top buckle when you first start using it but once it ‘clicks’ (like what I did there?!) you can put it on in seconds and it’s great for taking out with you as there aren’t any long bits of material to drag on the floor like there is with a wrap. 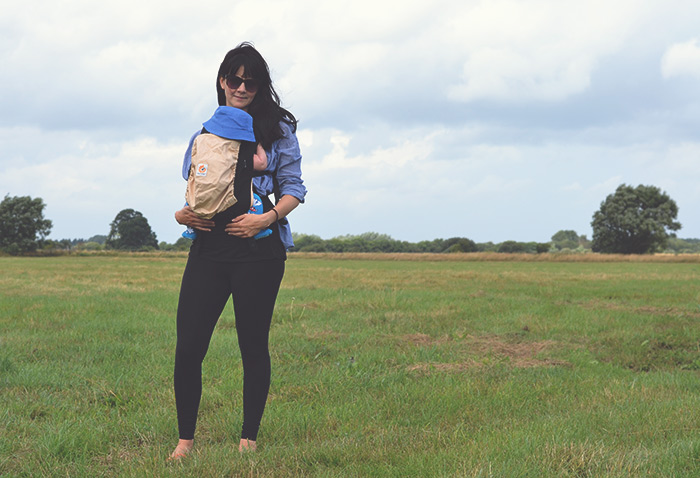 You can adjust all the buckles easily to make sure it fits you comfortably and the best thing about this is that you can loosen one of them up allowing your baby to reach your boob, perfect for feeding on the go! 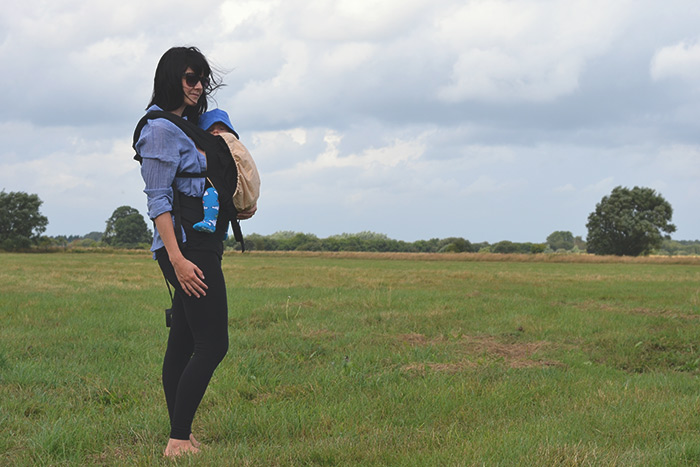 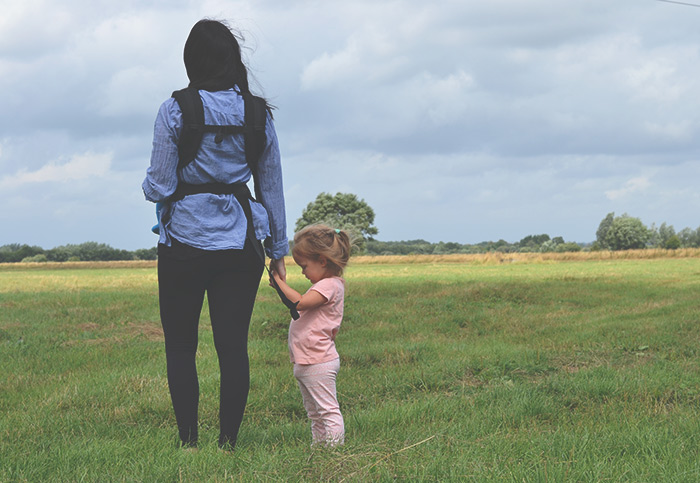 I used the Ergo until Tiger was about 10 months old by which point it had started getting uncomfortable, I’m not sure this was to do with the carrier and more to do with the fact that he was getting too heavy for a front carry. You can use the Ergo on your back too but I just never got the hang of back carries. I either found I felt like I was going to topple over or it would trigger my back to go into spasm. I also tried wraps on my back but the same thing happened.

So the final carrier I used was a mei tai. I did a lot of research into the most supportive type of carrier for carrying your baby on your front and this was suggested and it was absolutely brilliant. It was made from really thick, heavy material and once tied up would stay in place for hours. I’m going to be really annoying now though and say I can’t remember the make of it, I bought it off someone in the baby wearing Facebook group and it was a make I hadn’t heard of before. The group is great though because you can buy second hand carriers to try out then sell them on for what you paid for them if you don’t feel it’s right, wraps and carriers don’t really loose value as people like them more when they have been worn in. 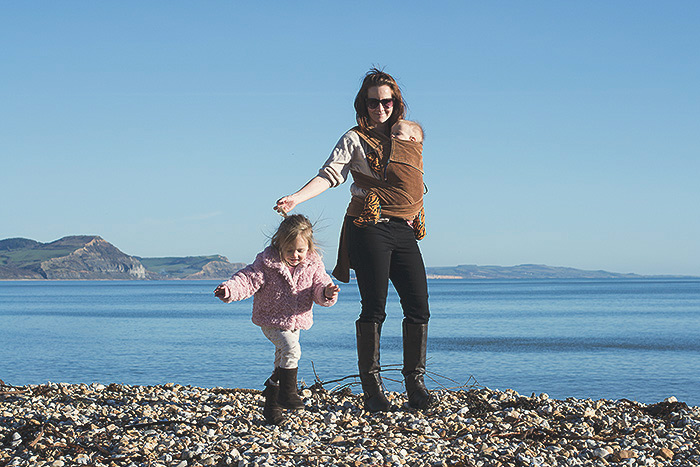 This carrier lasted me until Tiger was about one by which point I couldn’t have him on my front anymore.

So those were the baby carriers that I used and my baby wearing experience was one of the best bits of parenting second time round. It makes life so much easier when you have a toddler too and having a warm baby snuggled up against you all day is just so lovely. In fact I really miss it and writing this has made me so broody.

Have you tried baby wearing?

If you would like to know more then I would really recommend joining one of the baby wearing groups on Facebook or visiting your local sling library where you can try different types of carriers as there are hundreds of different types and they all fit people differently.

Thank you to Born Direct for sending me the Moby Wrap.

Five Things I Can’t Live Without